Blu-ray goes 'Into The Woods' in March. Up for pre-order Now!

The star-studded musical will venture onto Blu-ray next month. Pre-order your copy now!

In an early announcement to retailers, Disney/Buena Vista will be releasing 'Into The Woods' on Blu-ray on March 26.

Iconic characters, such as Cinderella, Little Red Riding Hood, Jack and the Beanstalk and Rapunzel find their fates intertwined with a humble baker and his wife, whose longing to have a child sends them on a quest to reverse a witch's (Streep) curse. With an all-star cast, this spellbinding adventure is everything you could ever wish for!

The Blu-ray will feature 1080p video, a lossless 7.1 soundtrack, and supplements will include: Never-Before-Seen Sondheim Original Song: "She'll Be Back" - Meryl Streep performs a compelling new song that sheds a little more light on the Witch's relationship with Rapunzel. This never-before- seen composition was penned especially for this movie by Stephen Sondheim and James Lapine, and is seen here exclusively on Blu-ray and EHV. With introduction by Director Rob Marshall; There's Something About The Woods - Journey into this mysterious forest to discover how this compelling, new musical was made. Meet Director Rob Marshall and his award-winning team of artists and craftspeople, see how the woods were brought to life…and what they represent to the story...and to all of us; The Cast As Good As Gold - Emily Blunt. Anna Kendrick. Chris Pine. James Corden. Johnny Depp. Meryl Streep. Meet the remarkable cast of this musical movie, and hear of their affinity for this Broadway classic; Deeper Into The Woods - Journey even further into the development of the film in "From Stage To Screen," "Magic of the Woods," "Designing the Woods" and "The Costumes of the Woods"; Filmmaker Commentary with Director Rob Marshall and Producer John DeLuca; and Music & Lyrics - Get direct access to the musical song segments from the film, with optional sing-along lyrics.

You can find the latest specs for 'Into The Woods' linked from our Blu-ray Release Schedule, where it is indexed under March 26. 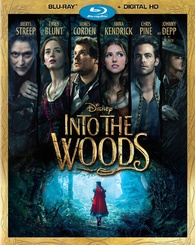