The second season of the Marvel series will make its Blu-ray debut in September.

In an early announcement to retailers, Disney/Buena Vista has revealed 'Agents of S.H.I.E.L.D.: The Complete Second Season' will arrive on Blu-ray on September 18.

After helping to thwart Hydra, Agent Phil Coulson was appointed as Director and tasked with rebuilding the agency. By his side are Agent Melinda May, expert pilot, martial artist and longtime friend, and computer hacker Skye, now a full-fledged S.H.I.E.L.D. agent. Agent Leo Fitz, brilliant engineer, and Agent Jemma Simmons, genius bio-chemist, are dealing with the impacts of their near-death experience at the hands of Grant Ward, a highly trained agent in combat and espionage, who was found to be a Hydra mole. Also joining Coulson's core team is Lance Hunter, a dashing mercenary sharp shooter with a quick wit.

Specs and supplements have yet to be revealed, but suggested list price for the Blu-ray is $79.99.

You can find the latest specs for 'Agents of S.H.I.E.L.D.: The Complete Second Season' linked from our Blu-ray Release Schedule, where it is indexed under September 18. 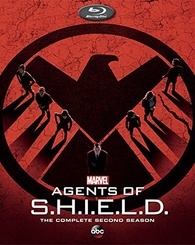