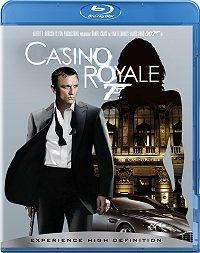 With rumored first-week US sales of over 100,000 units, 'Casino Royale' easily topped Nielsen VideoScan's Blu-ray sales charts for the week ending March 18, outselling 'The Departed' on Blu-ray (in its fourth week out) by a margin of 9:1.

And while 'Royale' seems likely to lead the Blu-ray pack for several weeks to come, format war watchers have begun shifting their focus to this week's dual-format release of 'Happy Feet' for the latest in a series of head-to-head disc sales match-ups.

As we reported a few weeks back, last month's dual-format release of 'The Departed' saw the movie's Blu-ray edition outsell its HD DVD counterpart by over 50%. Since then, some have raised the possibility that the Blu-ray camp's large PlayStation 3 installed base could serve as a disadvantage on genre-specific titles (such as the family-oriented 'Happy Feet') that may not be of interest to the gamer crowd.

Indeed, a quick comparison of Amazon sales ranks for pre-orders of both editions on Sunday afternoon did give the HD DVD edition a slight edge (at #58) vs the Blu-ray edition (at #71).

Of course, using Amazon sales ranks to suggest a possible trend in overall disc sales is a leap (and has proven wrong before), but if the HD DVD edition of 'Happy Feet' does end up outselling the Blu-ray, it would certainly give HD DVD backers a much-needed PR boost, as well as a possible argument for trying to convince younger-skewing Blu-ray exclusive studios such as Disney and Fox to go dual format.

As always, we'll be keeping an eye on the discs sales results for these titles as they come in and will keep you updated. Watch this space!