'Blackbird' Blu-ray up for Pre-Order

In an early announcement to retailers, 'Blackbird' is coming to Blu-ray in the near future.

'Blackbird' tells the story of seventeen-year-old Randy (Julian Walker), a devout Christian, who, as strong as he seems on the outside, is hiding a secret inner struggle - the denial of being gay. He is also struggling with his life at home since his father (Isaiah Washington) has left, and Randy cares for his emotionally disturbed mother (Mo'Nique). It is not until he opens himself up to love that he discovers that becoming a man means accepting who you really are.

You can find the latest specs for 'Blackbird' linked from our Blu-ray Release Schedule, where it's indexed under PENDING. 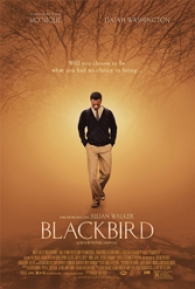 Discs mentioned in this article: (Click for specs and reviews)
Blackbird (Blu-ray)