'Adult Beginners' Blu-ray up for Pre-Order

The dramedy starring Rose Byrne, Nick Kroll, and Joel McHale is coming to Blu-ray in 2015.

In an early announcement to retailers, 'Adult Beginners' is in the works for Blu-ray later this year.

A young, narcissistic entrepreneur crashes and burns on the eve of his company's big launch. With his entire life in total disarray, he leaves Manhattan to move in with his estranged pregnant sister, brother-in-law and 3-year-old nephew in the suburbs - only to become their nanny.

You can find the latest specs for 'Adult Beginners' linked from our Blu-ray Release Schedule, where it's indexed under PENDING. 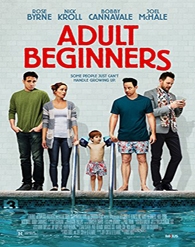 Discs mentioned in this article: (Click for specs and reviews)
Adult Beginners (Blu-ray)