The recipient of four Golden Horse nominations is planned for Blu-ray in February.

In an early announcement to retailers, Well Go USA will be releasing 'Brotherhood of Blades' on Blu-ray on February 10.

The period film is set in the late Ming Dynasty, where a young emperor is determined to take down the all-powerful eunuch Wei and purge his supporters. Caught in the midst of the intrigue are three lowly, cash-strapped warriors from the Imperial Assassins, the secret police, who are given the orders to find and kill Wei.

Specs have yet to be finalized, but supplements include the original trailer and an English dub.

You can find the latest specs for 'Brotherhood of Blades' linked from our Blu-ray Release Schedule, where it is indexed under February 10. 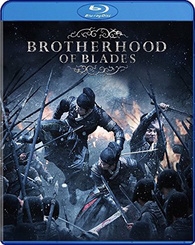