Aquaman swims his way into the next DC Comics animated feature arriving on Blu-ray in January. You can pre-order it here.

In an early announcement to retailers, Warner Brothers will be releasing 'Justice League: Throne of Atlantis' on Blu-ray on January 27.

Atlantis, led by Aquaman's brother Ocean Master, attacks the East Coast of the United States, flooding major cities including Metropolis, Gotham City and several others. The Justice League comes together to help Aquaman turn back the tide, but soon learn they're woefully overmatched by the Atlantean Army, and must find a way to save the world from total annihilation. The crossover was spread across "Justice League" 14-17 and "Aquaman" 14-16.

The Blu-ray will feature 1080p video, a lossless 5.1 soundtrack, and supplements will include: All-New Featurettes, Preview of the Next DC Universe Animated Original Movie, Four Bonus Cartoons, and more.

You can find the latest specs for 'Justice League: Throne of Atlantis' linked from our Blu-ray Release Schedule, where it is indexed under January 27. 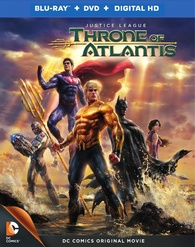