In an early announcement to retailers, Warner Brothers says 'Jersey Boys' will arrive on Blu-ray on November 11.

The film tells the story of four young men from the wrong side of the tracks in New Jersey who came together to form the iconic 1960s rock group The Four Seasons. The story of their trials and triumphs are accompanied by the songs that influenced a generation, including "Sherry," "Big Girls Don't Cry," "Walk Like a Man," "Dawn," "Rag Doll," "Bye Bye Baby," "Who Loves You," and many more.

Specs have yet to be revealed, but supplements will include: From Broadway To The Big Screen Featurette; Too Good To Be True Featurette; and "Oh, What A Night" To Remember.

You can find the latest specs for 'Jersey Boys' linked from our Blu-ray Release Schedule, where it is indexed under November 11. 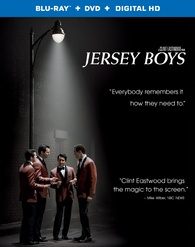