THE CURSE OF LA LLORONA Announced for Blu-ray

The horror flick will haunt audiences on Blu-ray in August.

Warner Bros. and New Line Cinema have announced plans to bring The Curse of La Llorona to Blu-ray on August 6. In addition, the film will hit Digital HD on July 16 via select retailers like Amazon, FandangoNOW, iTunes, PlayStation, Vudu, Xbox, and more.

Ignoring the eerie warning of a troubled mother suspected of child endangerment, a social worker and her own small kids are soon drawn into a frightening supernatural realm. Their only hope to survive La Llorona's deadly wrath may be a disillusioned priest and the mysticism he practices to keep evil at bay, on the fringes where fear and faith collide.

Supplements for the Blu-ray/DVD/Digital combo pack will include:

You can find the latest specs for The Curse of La Llorona linked from our Blu-ray Release Schedule, where it is indexed under August 6. 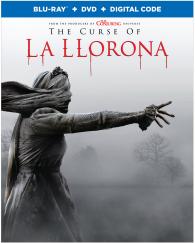 Discs mentioned in this article: (Click for specs and reviews)
The Curse of La Llorona (Blu-ray)