'Wish I Was Here' Dated for Blu-ray

Zach Braff's comedy is planned for Blu-ray at the end of October. Pre-order your copy here.

In an early announcement to retailers, Universal will be releasing 'Wish I Was Here' on Blu-ray on October 28.

'Wish I Was Here' tells the story of Aidan Bloom, a struggling actor, father and husband who, at 35, is still trying to find his identity. A purpose for his life. Trying to home school his two children when his father can no longer afford to pay for private education and the only available public school is on its last legs, Aidan teaches them about life and gradually discovers parts of himself he hadn't been able to find.

You can find the latest specs for 'Wish I Was Here' linked from our Blu-ray Release Schedule, where it is indexed under October 28. 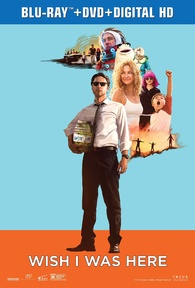