'Are You Here' Dated for Blu-ray

The star-studded comedy from Matthew Weiner arrives on Blu-ray at the end of the month. You can order it here.

In an early announcement to retailers, Millennium Entertainment will be bringing 'Are You Here' to Blu-ray on September 30.

Specs have yet to be revealed, but supplements include an audio commentary with writer and director Matthew Weiner.

You can find the latest specs for 'Are You Here' linked from our Blu-ray Release Schedule, where it is indexed under September 30. 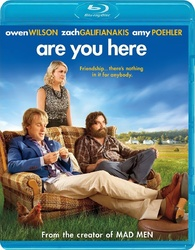