'Step Up All In' Blu-ray Supplements Detailed

Bonus features have been detailed for the latest installment in the 'Step Up' franchise dancing its way toward Blu-ray this November. Pre-orders are now live.

As previously reported, Lionsgate is preparing 'Step Up All In' for Blu-ray in the near future, and now the date looks to be November 4.

In the next exciting chapter of the international phenomenon 'Ste Up,' all-stars from previous installments come together in glittering Las Vegas, battling for a victory that could define their dreams and their careers. Starring Ryan Guzman, Briana Evigan, and Adam G. Sevani. Directed by Trish Sie.

Specs have not been detailed yet, but supplements include: Audio Commentary with Director Trish Sie and Actress Briana Evigan; Ryan's Favorite dance scenes (with optional commentary); Deleted Scenes; The Vortex Dance Index; and three Blu-ray exclusive featurettes -- All in with the Crew, Dance Breakdown: Final Stage, and Clap,Stomp, Slide: The Sounds of Battle.

You can find the latest specs for 'Ste Up All In' linked from our Blu-ray Release Schedule, where it's indexed under November 4. 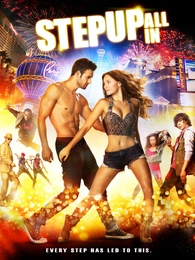