The comedy based on the novel "The Switch" written by Elmore Leonard is bound for Blu-ray in October. You can pre-order the Blu-ray now.

In an early announcement to retailers, Lionsgate will be releasing 'Life of Crime' on Blu-ray on October 28.

When a pampered housewife (Jennifer Aniston) is kidnapped by a pair of blundering ex-cons in an effort to extort money from her sleazy real-estate tycoon husband (Tim Robbins), the perfect crime becomes the perfect opportunity for the husband to ride off into the sunset with his sexy young mistress (Isla Fisher) until the housewife decides it is her turn to even the score.

You can find the latest specs for 'Life of Crime' linked from our Blu-ray Release Schedule, where it is indexed under October 28. 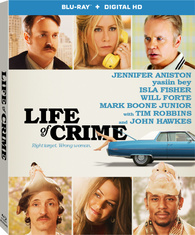