The sixth and final season of the animated series that takes place in a galaxy far, far away arrives on Blu-ray next month. You can pre-order it now.

In an early announcement to retailers, Disney/Buena Vista will be releasing 'Star Wars: The Clone Wars - The Lost Missions' on Blu-ray on November 11.

In these eagerly anticipated episodes of Star Wars: The Clone Wars, some of the deepest mysteries of the conflict between the light and the dark sides of the Force are revealed. An intrepid clone trooper discovers a shocking secret, Anakin Skywalker's closest relationship is tested to its limits, and what Master Yoda discovers while investigating the disappearance of a Jedi could forever change the balance of power in the galaxy.

You can find the latest specs for 'Star Wars: The Clone Wars - The Lost Missions' linked from our Blu-ray Release Schedule, where it's indexed under November 11. 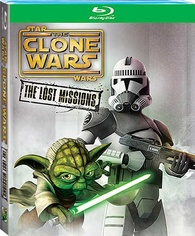