This is my final 'Deadpool' post this week, I swear!

After getting some hands on time with the stunning 'Deadpool' Ultra HD Blu-ray (and the very strong Blu-ray) over the previous weekend, our friends at the Fox Innovation Lab invited journalists for a direct UHD vs HD demonstration. Unlike our previous demo, this time we were treated to consumer grade encodes as both the HD and UHD sources played on IDENTICAL Samsung Ultra HD displays.

For an in-depth understanding as to how this demo went, please check out the video portions of my Ultra HD Blu-ray and Blu-ray reviews.

The short version is this: the Ultra HD Blu-ray absolutely CRUSHES the Blu-ray in side-by-side comparisons. To be fair, this effect wanes slightly in A-to-B comparisons with any sort of time delay, so don't feel too bad if you haven't upgraded yet. But side-by-side? Shoot. This is the release the earlier adopters have been waiting for. The Ultra HD offers deeper black levels, more vivid colors (hello, red!), and oodles of added highlight and CGI detail. I was really impressed. 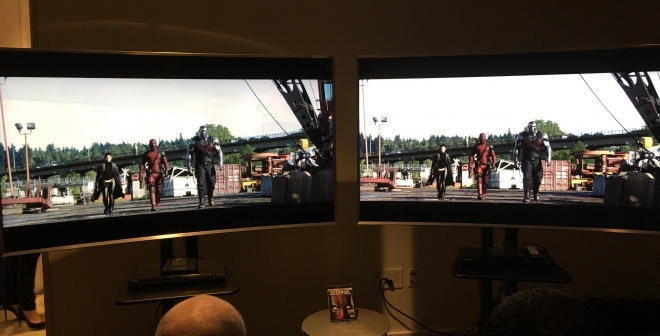 [NOTE: the above cellphone pic is to show the demo configuration ONLY. NOT to judge either format, let alone the fine details instantly visible in UHD HDR material.]

To help take us through what we were observing on the two displays, 'Deadpool' director, Tim Miller, as well as the film's colorist, Tim Stipan, lead a panel discussion moderated by Schawn Belston, EVP of Media and Library Services, Twentieth Century Fox Home Entertainment, where they chatted about their post-production process, the benefits of HDR, and answered a few questions.

The entire panel is a little too long to transcribe here, so what I've done is broken down key information using direct quotes. Enjoy!

Schawn Belstin: This is our first disc that features all HDR content, so the menus and logos and everything are in HDR. Also, object-based audio. Dolby Atmos is on the entire disc. This might not seem like that big a deal, but trust me when I say it was. We had to re-imagine all of our technical work flows behind the scenes to make this actually possible. To give you an example, we spent two months rendering and re-rendering, trying to figure out the best way to render the Fox logo in 4K, in open EXR, to get the most out of this HDR experience, and that was just the logo. So you can imagine what goes into an entire movie. But you didn't come here to hear me talk about the logo so let's get to the movie.

Tim Stipan: First we did the normal theatre pass, which is called P3 color space. Concurrently we also did two version of IMAX; we did a Xenon bulb and then we did a laser pass also. Then, actually, we did the Rec 709 HD pass. And then we did the HDR pass.

Tim Miller: Actually, so it's six if you count that, because then we did the Dolby [Vision] pass.

Tim Stipan: Oh, yeah, I almost forgot that. I felt like every time we were going through it we were seeing more and more and more. And the last pass that we did was the [UHD Blu-ray] HDR pass, which you are seeing here, and we were just like, "wow, gosh, we wish we had that at the beginning because you're not seeing so much detail in the skies and flames and Colossus and Deadpool's suit." Things of that nature. [HDR] allowed me to be better at my job because I could see more color information, I could match things better. By seeing all that extra color information and detail, I felt like I was doing a better job being a colorist. I felt a lot of shots now had this painterly quality to them, which I didn't quite notice as much when we were doing the normal theatrical color grade. 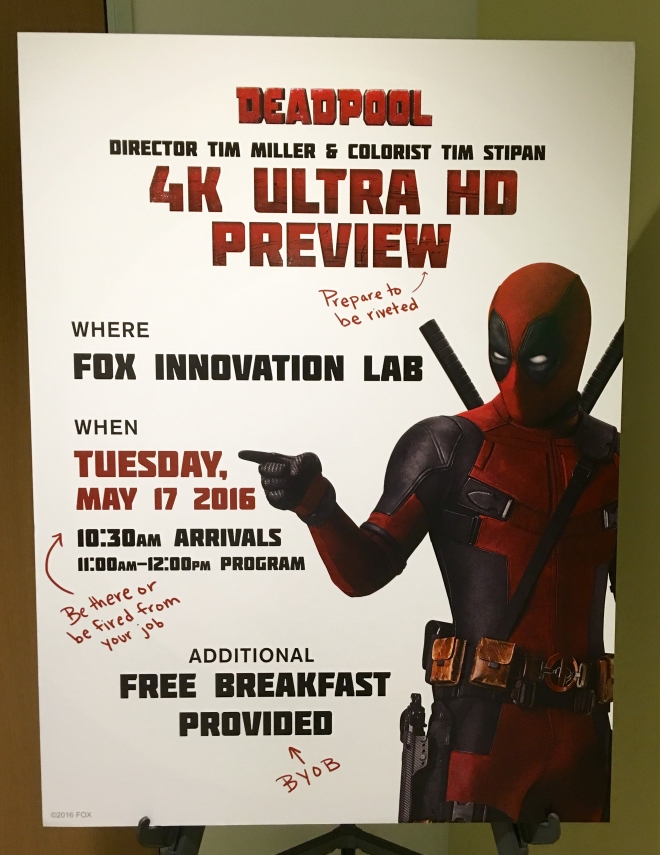 Tim Miller: For a first-time filmmaker every time I walked into DI, I'd get to see it on a big screen, thinking to myself, "I made a movie, fuck yeah!" [laughter] And then for this last pass they brought me in and sat me down in front of a monitor and I'm like, "well I've done this before..." But then it started playing and I truly thought it was the best looking -- format and display medium aside -- it's the best looking version of the movie by far.

Tim Stipan: Yeah, the amount of detail you get in flames. You see so much more of actual flame. I wouldn't say [SDR] looked like a 2D image, but all of a sudden [with HDR] it has extra dimension to it, it's almost like 3D.

Tim Miller: Having done DIs for four different outputs, the Ultra HD is just fucking amazing at the level of detail. Especially since we did it at the end of the process. Especially the skies is where I noticed it most. In a lot of the shots, particularly on the freeway fight, there is just so much more detail. It's like suddenly the sky was not a white mass the way it had been in all the other formats. Also Deadpool's costume was the other big thing I noticed. It's got a really fine weave to it and, suddenly, all the detail in that costume comes out in a way that turns to mush in all the other formats. And VFX too. Explosions, fires, things like that, the fight in the lab looks particularly cool in this super high res format.

Tim Stipan: We're taking advantage of the camera. The camera captures this and now with HDR you're allowed to see what the camera's actually capturing.

Tim Miller: We shot ['Deadpool' in] 3K on the Alexa. If we shot in 6K, which is the newer stuff, or I could have shot on the RED, how much better would this [Ultra HD Blu-ray with HDR / WCG] look there? Where [the Blu-ray] wouldn't benefit from the extra resolution, [the Ultra HD Blu-ray] would. So aside from all the other compositional benefits, from being able to fuck around with framing, I think we'll get a huge bump in the level of detail. But to answer your question, [HDR] would probably have a negative effect on the filmmaking process because suddenly I'd be less forgiving about all that shit I know were going to see in the background.

Tim Stipan: The thing I keep thinking about is the faces ... I think this happened when HD first came out is that people were all of a sudden saying, "we gotta put extra makeup on". That would be my only concern with HDR, but otherwise all the extra detail you're seeing is a huge benefit.

Tim Miller: It could help or hurt depending on how good the CG is. If it didn't integrate well, it would excentuate ... and just more clearly illuminate where you fucked up.

Tim Stipan: It was something that just happened. We saw [the big explosion during the film's climax] in HDR and there was more of a boldness, more detail to it. It's not that we didn't like what we did in the SDR version, but the HDR version looked great and we were like, "let's go with it." Could we have tweaked the SDR to get it closer to the HDR, yes, but it still wouldn't have the detail because there is a difference between the color of the flames.

Tim Miller: But don't you just have more range to work with [in HDR]? If you had gone after that in [SDR], it would have fucked up other things.

Tim Stipan: It's not something we were isolating. We didn't isolate the flames, but once we color corrected the image, they kinda fell into place. 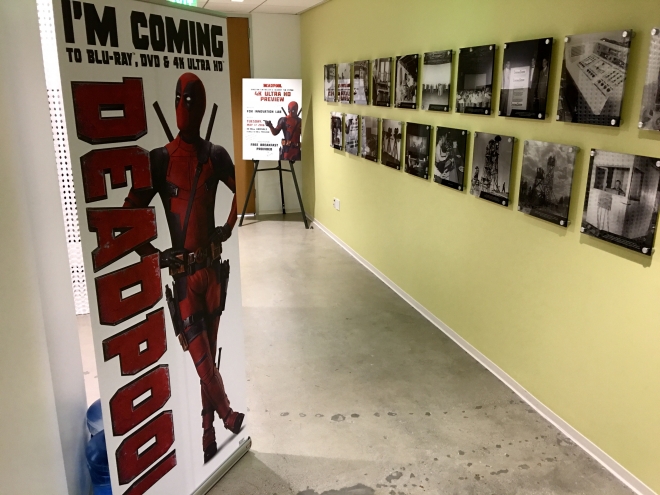 Thanks again to the Fox Innovation Lab for the invite. It's great to know, outside of our home theatre geek circles, filmmakers are as excited about this new format's capabilities as we are. Because, at the end of the day, HDR means audiences are experiencing more of a film's production than ever before.

And for Heaven's sake, people, don't just sit there reading this, go check out the 'Deadpool' Ultra HD Blu-ray for yourselves... OR, if you're reading this on or before May 22, 2016, enter for a chance to WIN A FREE copy from your buds here at High-Def Digest.