Rock Documentary 'I Am Thor' Announced for Blu-ray

The heavy metal star is staging a comeback on Blu-ray in January.

In an early announcement to retailers, Dark Sky Films is preparing 'I Am Thor' for Blu-ray on January 19.

Jon Mikl Thor was a bodybuilding, steel-bending, brick-smashing rock star in the 70s & 80s whose theatrical band THOR hit the scene alongside Metallica and Kiss, but never achieved the gold record status of its contemporaries.After a brief but memorable film career saw him starring in the cult classics Rock n Roll Nightmare and Zombie Nightmare, Thor all but disappeared from the entertainment map. But ten years into retirement, and incapable of living like a normal mortal human being, Thor attempts a comeback to achieve the level of success that has eluded him his entire career - a comeback that nearly kills him.Tracing the rise, fall, and rebirth of a determined performer over the course of a career that has seen more than its fair share of highs and lows, I AM THOR paints a fascinating and sometimes unbelievable portrait of this larger-than-life icon.

You can find the latest specs for 'I Am Thor' linked from our Blu-ray Release Schedule, where it's indexed under January 19. 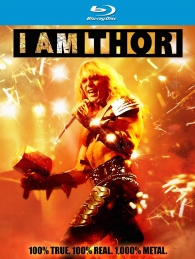 Discs mentioned in this article: (Click for specs and reviews)
I Am Thor (Blu-ray)