In an early announcement to retailers, Dark Sky Films is preparing 'Catfight' for Blu-ray on April 25.

In this action comedy, two former college friends, who now find themselves in very different walks of life, meet up at a fancy cocktail party: Veronica (Sandra Oh) has become the entitled, wine-loving wife of a rich businessman, while Ashley (Anne Heche), along with her lover Lisa (Alicia Silverstone), struggles to make ends meet as an artist. As the two women reconnect, long-buried hostilities, jealousy, and anger explode into a vicious, bloody fight that leaves both of them battered and bruised – and ready for more.

You can find the latest specs for 'Catfight' linked from our Blu-ray Release Schedule, where it's indexed under April 25. 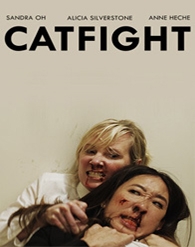 Discs mentioned in this article: (Click for specs and reviews)
Catfight (Blu-ray)