The extremely graphic film is planned for Blu-ray next month.

In an early announcement to retailers, Cult Epics will be releasing 'The Death King' on Blu-ray on June 9.

Seven stories on Death and Suicide, each taking place on a different day of the week, enframed by the decomposition of a human body. Warning: extremely graphic. Der Todesking, available for the first time on Blu-ray, is presented Uncut and Uncensored in a new High Definition transfer, including the bonus Shockumentary Corpse F##king Art; an in-depth look behind the scenes of Nekromantik, Nekromantik 2 and Der Todesking.

You can find the latest specs for 'The Death King' linked from our Blu-ray Release Schedule, where it is indexed under June 9. 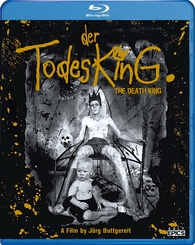