The distributor has revealed its upcoming slate of June releases, including Terry Gilliam's 'The Fisher King' and Louis Malle's 'My Dinner with Andre.'

In an early announcement to retailers, Criterion is preparing 'My Dinner with André,' 'A Master Builder,' 'André Gregory & Wallace Shawn: 3 Films,' 'The Bridge,' 'The Fisher King (Criterion),' 'Valerie and Her Week of Wonders,' and 'Five Easy Pieces' for Blu-ray throughout the month of June.

'My Dinner with André' (June 16) - In Louis Malle's captivating and philosophical 'My Dinner with André,' actor and playwright Wallace Shawn sits down with friend and theater director André Gregory at an Upper West Side restaurant, and the two proceed into an alternately whimsical and despairing confessional on love, death, money, and all the superstition in between. Playing variations on their own New York–honed personas, Shawn and Gregory, who also wrote the screenplay, dive in with introspective, intellectual gusto, and Malle captures it all with a delicate, artful detachment. A fascinating freeze-frame of cosmopolitan culture, My Dinner with André remains a unique work in cinema history.

The Blu-ray will feature 1080p video, an uncompressed English mono soundtrack, and supplements will include: Interview from 2009 with actors and cowriters André Gregory and Wallace Shawn, conducted by their friend the filmmaker Noah Baumbach; "My Dinner with Louis," a 1982 episode of the BBC program Arena in which Shawn interviews director Louis Malle; PLUS: A booklet featuring an essay by critic Amy Taubin and the prefaces written by Gregory and Shawn for the 1981 publication of the film’s screenplay. 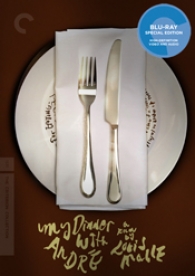 'A Master Builder' (June 16) - Twenty years after their brilliant cinema-theater experiment 'Vanya on 42nd Street,' Wallace Shawn and André Gregory reunited to produce another idiosyncratic big-screen version of a classic play, this time Henrik Ibsen’s Bygmester Solness ('Master Builder Solness'). Brought pristinely to the screen by Jonathan Demme, this is a compellingly abstract reimagining; it features Shawn (who also wrote the adaptation) as a visionary but tyrannical middle-aged architect haunted by figures from his past, most acutely an attractive, vivacious young woman (the breathtaking newcomer Lisa Joyce) who has appeared on his doorstep. Also featuring standout supporting performances from Julie Hagerty, Larry Pine, and Gregory, 'A Master Builder,' like 'Vanya,' is the result of many years of rehearsals, a living, breathing, constantly shifting work that unites theater, film, and dream. 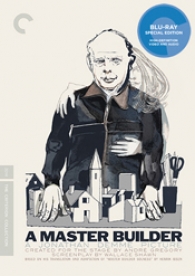 'André Gregory & Wallace Shawn: 3 Films' (June 16) - When André Gregory and Wallace Shawn—theater directors, writers, actors, and longtime friends—sat down for a stimulating meal in 1981’s 'My Dinner with André,' they not only ended up with one of cinema’s unlikeliest iconic scenarios but launched a film collaboration that would continue to pay creative dividends for decades. The subsequent projects they made together for the screen—1994’s 'Vanya on 42nd Street,' a passionate read-through of Anton Chekhov’s Uncle Vanya, and 2014’s striking Henrik Ibsen interpretation 'A Master Builder'—are penetrating works that exist on the edge of theater and film, and that both emerged out of many years of rehearsals with loyal troupes of actors. Gregory and Shawn’s unique contributions to the cinematic landscape are shape-shifting, challenging, and entertaining works about the process of creation.

The Blu-ray will feature 1080p video, an English LPCM Mono soundtrack (My Dinner with Andre), English LPCM 2.0 soundtrack (Vanya on 42nd Street), and English DTS-HD MA 5.1 soundtrack (A Master Builder), and supplements will include: Interview from 2009 with André Gregory and Wallace Shawn about My Dinner with André, conducted by their friend the filmmaker Noah Baumbach; "My Dinner with Louis," a 1982 episode of the BBC program Arena in which Shawn interviews director Louis Malle; Documentary from 2012 about Vanya on 42nd Street, featuring interviews with Gregory; actors Lynn Cohen, George Gaynes, Julianne Moore, Larry Pine, Shawn, and Brooke Smith; and producer Fred Berner; New interviews about A Master Builder with Gregory, Shawn, director Jonathan Demme, and actors Julie Hagerty and Lisa Joyce; New program featuring Gregory, Shawn, and their friend the author Fran Lebowitz in conversation; Trailers for Vanya on 42nd Street and A Master Builder; PLUS: Essays on the films by critics Amy Taubin, Steve Vineberg, and Michael Sragow; the prefaces written by Gregory and Shawn for the 1981 publication of My Dinner with André’s screenplay; and a 1994 report by Taubin from the set of Vanya on 42nd Street. 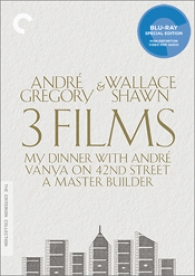 'The Bridge' (June 23) - The astonishing 'The Bridge,' by Bernhard Wicki, was the first major antiwar film to come out of Germany after World War II, as well as the nation's first postwar film to be widely shown internationally, even securing an Oscar nomination. Set near the end of the war, it follows a group of teenage boys in a small town as they contend with everyday matters like school, girls, and parents, before enlisting as soldiers and being forced to defend their home turf in a confused, terrifying battle. This expressively shot, emotionally bruising drama dared to humanize young German soldiers at a historically tender moment, and proved influential for the coming generation of New German Cinema auteurs.

The Blu-ray will feature 1080p video, an uncompressed German mono soundtrack, and supplements will include: New interview with writer Gregor Dorfmeister, on whose autobiographical novel the film is based; New interview with filmmaker Volker Schlöndorff about the film’s impact on German cinema; Interview from 1989 with director Bernhard Wicki
Excerpt from a 2007 documentary by Elisabeth Wicki-Endriss, Wicki’s wife, featuring test reel footage from the shoot; PLUS: An essay by film critic Terrence Rafferty. 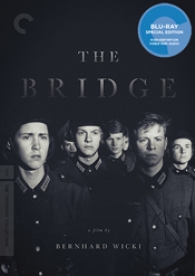 'The Fisher King' (June 23) - A fairy tale grounded in poignant reality, the magnificent, Manhattan-set 'The Fisher King,' by Terry Gilliam, features Jeff Bridges and Robin Williams in two of their most brilliant roles. Bridges plays a former radio shock jock reconstructing his life after a scandal, and Williams is a homeless man on a quest for the Holy Grail—which he believes to be hidden somewhere on the Upper West Side. Unknowingly linked by their pasts, the two men aid each other on a fanciful journey to redemption. This singular American odyssey features a witty script by Richard La Gravenese, evocative cinematography by Roger Pratt, and superb supporting performances by Amanda Plummer and an Oscar-winning Mercedes Ruehl, all harnessed by Gilliam into a humane, funny modern-day myth. 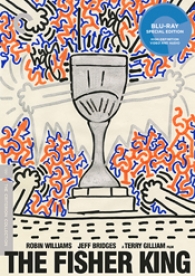 'Valerie and Her Week of Wonders' (June 30) - A girl on the verge of womanhood finds herself in a sensual fantasyland of vampires, witchcraft, and other threats in this eerie and mystical movie daydream. 'Valerie and Her Week of Wonders' serves up an endlessly looping, nonlinear fairy tale, set in a quasi-medieval landscape. Ravishingly shot, enchantingly scored, and spilling over with surreal fancies, this enticing phantasmagoria from director Jaromil Jireš is among the most beautiful oddities of the Czechoslovak New Wave.

The Blu-ray will feature 1080p video, an uncompressed Czech mono soundtrack, and supplements will include: Three early shorts by director Jaromil Jireš: Uncle (1959), Footprints (1960), and The Hall of Lost Steps (1960); New interview with Czechoslovak film scholar Peter Hames; Interviews from 2006 with actors Jaroslava Schallerová and Jan Klusák; Alternate 2007 psych-folk soundtrack to the film by the Valerie Project, and a new video piece on the music's origins; PLUS: An essay by critic Jana Prikryl. 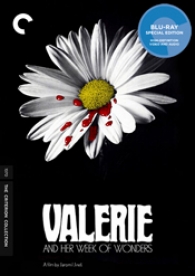 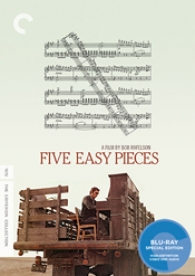