The distributor has revealed its upcoming slate of January releases, including The Coen Brothers' 'Inside Llewyn Davis' and Charles Vidor's 'Gilda.'

In an early announcement to retailers, Criterion is preparing 'The Complete Lady Snowblood,' 'Bitter Rice,' 'The American Friend,' 'Inside Llewyn Davis,' and 'Gilda' for Blu-ray throughout the month of January.

'The Complete Lady Snowblood' (January 5) - A young woman (Meiko Kaji), trained from childhood as an assassin and hell-bent on revenge for her father’s murder and her mother’s rape, hacks and slashes her way to gory satisfaction. Rampant with inventive violence and spectacularly choreographed swordplay, Toshiya Fujita’s pair of influential cult classics Lady Snowblood and Lady Snowblood: Love Song of Vengeance, set in late nineteenth- and early twentieth-century Japan, respectively, are bloody, beautiful extravaganzas composed of one elegant widescreen composition after another. The first Lady Snowblood was a major inspiration for Quentin Tarantino's Kill Bill saga, and both of Fujita’s films remain cornerstones of Asian action cinema.

The Blu-ray will feature 1080p video, a Japanese uncompressed mono soundtrack, and supplements will include: New interviews with Kazuo Koike, the writer of the manga on which the films are based, and screenwriter Norio Osada; Trailers; PLUS: An essay by critic Howard Hampton. 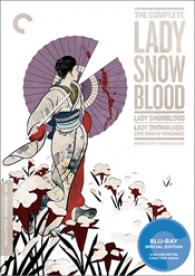 'Bitter Rice' (January 12) - During planting season in Northern Italy's Po Valley, an earthy rice-field worker (the seductive Silvana Mangano) falls in with a small-time criminal (Vittorio Gassman) who is planning a daring heist of the crop, as well as his femme-fatale-ish girlfriend, played by the Hollywood star Doris Dowling. Both a socially conscious look at the hardships endured by underpaid field workers and a melodrama tinged with sex and violence, this early smash for producer extraordinaire Dino De Laurentiis and director Giuseppe De Santis is neorealism with a heaping dose of pulp.

The Blu-ray will feature 1080p video, an uncompressed English mono soundtrack, and supplements will include: Giuseppe de Santis, a 2007 documentary by screenwriter Carlo Lizzani; Interview with Lizzani from 2003; Trailer; PLUS: An essay by critic Pasquale Iannone. 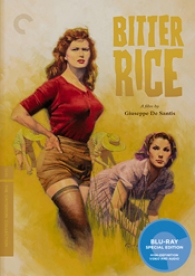 'The American Friend' (January 12) - Wim Wenders pays loving homage to rough-and-tumble Hollywood film noir with The American Friend, a loose adaptation of Patricia Highsmith’s novelRipley’s Game. Dennis Hopper oozes quirky menace as an amoral American art dealer who entangles a terminally ill German everyman, played by Bruno Ganz, in a seedy criminal underworld as revenge for a personal slight—but when the two become embroiled in an ever-deepening murder plot, they form an unlikely bond. Filmed on location in Hamburg and Paris, with some scenes shot in grimy, late-seventies New York City, Wenders’s international breakout is a stripped-down crime story that mixes West German and American film flavors, and it features cameos by filmmakers Jean Eustache, Samuel Fuller, and Nicholas Ray.

The Blu-ray will feature 1080p video, an English/French/German DTS-HD MA 5.1 soundtrack, and supplements will include: Audio commentary from 2002 featuring Wenders and actor Dennis Hopper; New interview with Wenders; New interview with actor Bruno Ganz; Deleted scenes with audio commentary by Wenders; Trailer; PLUS: An essay by author Francine Prose. 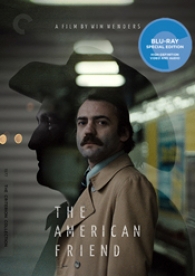 'Inside Llewyn Davis' (January 19) - The visionary chroniclers of eccentric Americana Joel and Ethan Coen present one of their greatest creations in Llewyn Davis, a singer barely eking out a living on the peripheries of the flourishing Greenwich Village folk scene of the early sixties. As embodied by Oscar Isaac, in a revelatory performance, Llewyn (loosely modeled on off-the-radar folk legend Dave Van Ronk) is extraordinarily talented but also irascible, rude, and self-defeating. Our man’s circular odyssey through an unforgiving wintry cityscape, evocatively captured by cinematographer Bruno Delbonnel, is realized with poignant humor and the occasional surreal touch. Featuring a folk soundtrack curated by T Bone Burnett, Inside Llewyn Davis reminds us that in the Coens’ world, history isn’t necessarily written by the winners.

The Blu-ray will feature 1080p video, an English DTS-HD MA 5.1 soundtrack, and supplements will include: New audio commentary featuring writers Robert Christgau, David Hajdu, and Sean Wilentz; The First Hundred Feet, the Last Hundred Feet, a new conversation between filmmaker Guillermo del Toro and directors Joel and Ethan Coen about the evolution of their approach, from Blood Simple to Inside Llewyn Davis; Inside "Inside Llewyn Davis," a forty-five-minute 2013 documentary; Another Place, Another Time (2014), a 101-minute film documenting an Inside Llewyn Davis tribute concert, featuring Joan Baez, Mumford & Sons, Punch Brothers, Gillian Welch, Jack White, and others; New piece on the history of “Fare Thee Well (Dink’s Song),” featuring music producer T Bone Burnett and the Coens; New piece about Dave Van Ronk and the Greenwich Village folk scene of the early sixties, featuring music writer and historian Elijah Wald; Sunday, a short 1961 documentary by Dan Drasin about the riots that took place in Washington Square Park after folk musicians were prevented from gathering and playing there; Trailers; PLUS: An essay by film critic Kent Jones. 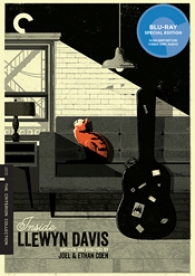 'Gilda' (January 19) - "Gilda, are you decent?" Rita Hayworth tosses her hair back and slyly responds, "Me?" in one of the great star entrances in movie history. Gilda,directed by Charles Vidor, features a sultry Hayworth in her most iconic role, as the much-lusted-after wife of a criminal kingpin (George Macready), as well as the former flame of his bitter henchman (Glenn Ford), and she drives them both mad with desire and jealousy. An ever-shifting battle of the sexes set on a Buenos Aires casino’s glittering floor and in its shadowy back rooms, Gildais among the most sensual of all Hollywood noirs.

The Blu-ray will feature 1080p video, an uncompressed English mono soundtrack, and supplements will include: Audio commentary from 2010 by film critic Richard Schickel; New interview with film noir historian Eddie Muller; Appreciation of Gilda from 2010 featuring filmmakers Martin Scorsese and Baz Luhrmann; Rita Hayworth: The Columbia Lady, a 2000 featurette on Hayworth’s career as an actor and dancer; Trailer; PLUS: An essay by critic Sheila O’Malley. 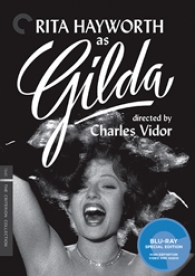