The distributor has revealed its upcoming slate of April releases, including David Lean's 'Brief Encounter' and Howard Hawks' 'Only Angels Have Wings.'

In an early announcement to retailers, Criterion is preparing 'Only Angels Have Wings,' 'A Whit Stillman Trilogy: Metropolitan, Barcelona, The Last Days of Disco,' 'Barcelona,' 'Phoenix,' 'The Kennedy Films of Robert Drew & Associates,' and 'Brief Encounter' for Blu-ray throughout the month of April.

'Only Angels Have Wings' (April 12) - Electrified by the verbal wit and visual craftsmanship of the great Howard Hawks, Only Angels Have Wings stars Jean Arthur as a traveling entertainer who gets more than she bargained for during a stopover in a South American port town. There she meets a handsome yet aloof daredevil pilot, played by Cary Grant, who runs an airmail company, staring down death while servicing towns in treacherous mountain terrain. Both attracted to and repelled by his romantic sense of danger, she decides to stay on, despite his protestations. This masterful and mysterious adventure, featuring Oscar-nominated special effects, high-wire aerial photography, and Rita Hayworth in a small but breakout role, explores Hawks’s recurring themes of masculine codes and the strong-willed women who question them. 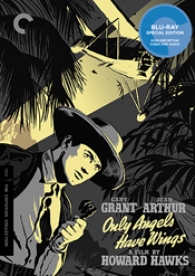 'A Whit Stillman Trilogy: Metropolitan, Barcelona, The Last Days of Disco' (April 19) - Over the course of the 1990s, writer-director Whit Stillman made a trilogy of films about the acid tongues and broken hearts of some haplessly erudite young Americans in New York and abroad. Set in the eighties, these films would trace the arc of that decade, led by Stillman’s Oscar-nominated debut,Metropolitan, which introduced moviegoers to a strange, endangered species of privileged New Yorker dubbed the "urban haute bourgeoisie." Chronologically, the tale continues with The Last Days of Disco, in which, with an earnest wink, Stillman mourns the close of New York’s nightclub era via the story of two young party-going women juggling day jobs in book publishing. Finally, Barcelona plunks down a pair of love-starved upper-class men in a foreign city riddled with anti-American sentiment. At once effervescent and melancholy, these are comedies about the ends of eras, social change as seen through the eyes of reluctant, unflaggingly sardonic romantics. 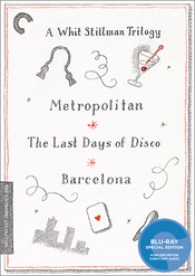 'Barcelona' (April 19) - Whit Stillman followed his delightful indie breakthrough Metropolitan with another clever and garrulous comedy of manners, this one with a darker edge. A pair of preppy yet constitutionally mismatched American cousins—a salesman and a navy officer—argue about romance and politics while working in the beautiful Spanish city of the film’s title. Set during the eighties,Barcelona explores topics both heady (American exceptionalism, Cold War foreign policy) and hilarious (the ins and outs of international dating, the proper shaving method) while remaining a constantly witty delight, featuring a sharp young cast that includes Taylor Nichols, Chris Eigeman, and Mira Sorvino.

The Blu-ray will feature 1080p video, an English DTS-HD MA 5.1 soundtrack, and supplements will include: Audio commentary from 2002 featuring Stillman and actors Chris Eigeman and Taylor Nichols; New video essay by film critic Farran Smith Nehme about the trilogy made up of Metropolitan, Barcelona, and The Last Days of Disco; The Making of “Barcelona,” a short documentary from 1994 featuring behind-the-scenes footage and on-set interviews with Stillman and cast members; Deleted scenes and alternate ending, with commentary by Stillman, Eigeman, and Nichols; Segment from a 1994 episode of the Today show featuring Stillman; Episode of The Dick Cavett Show from 1991 with Stillman; Trailer; PLUS: An essay by film scholar Haden Guest. 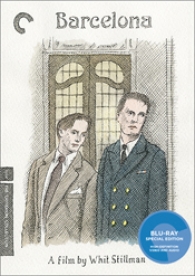 'Phoenix' (April 26) - This evocative and haunting drama, set in a rubble-strewn Berlin in 1945, is like no other film about post–World War II Jewish identity. After surviving Auschwitz, a former cabaret singer (Nina Hoss, in a dazzling, multilayered performance), her face disfigured and reconstructed, returns to her war-ravaged hometown to seek out the gentile husband who may or may not have betrayed her to the Nazis. Without recognizing her, he enlists her to play his wife in a bizarre hall-of-shattered-mirrors story that’s as richly metaphorical as it is preposterously engrossing. Revenge film or tale of romantic reconciliation? One doesn’t know until the superb closing scene of this marvel from Christian Petzold, perhaps the most important figure in contemporary German cinema. 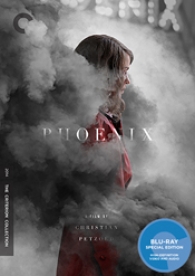 'The Kennedy Films of Robert Drew & Associates' (April 26) - Seeking to invigorate the American documentary format, which he felt was rote and uninspired, Robert Drew brought the style and vibrancy he had fostered as a Life magazine correspondent to filmmaking in the late fifties. He did this by assembling an amazing team—including such eventual nonfiction luminaries as Richard Leacock, D. A. Pennebaker, and Albert Maysles—that would transform documentary cinema. In 1960, the group was granted direct access to John F. Kennedy, filming him on the campaign trail and eventually in the Oval Office. This resulted in three films of remarkable, behind-closed-doors intimacy—Primary, Adventures on the New Frontier, and Crisis—and, following the president’s assassination, the poetic short Faces of November.Collected here are all four of these titles, early exemplars of the movement known as Direct Cinema and featuring the greatest close-up footage we have of this American icon.

The Blu-ray will feature 1080p video, an uncompressed English mono soundtrack, and supplements will include: Alternate, twenty-six-minute cut of Primary, edited by filmmaker Richard Leacock; Audio commentary on the Leacock edit of Primary, featuring Leacock and filmmakers Robert Drew and D. A. Pennebaker, recorded in conversation with film critic Gideon Bachmann in 1961; Robert Drew in His Own Words, a new documentary featuring archival interview footage; New conversation between Pennebaker and Jill Drew, Robert Drew’s daughter-in-law and the general manager of Drew Associates; Outtakes from Crisis, along with a discussion by historian Andrew Cohen, author of Two Days in June; New conversation about Crisis featuring former U.S. attorney general Eric Holder and Sharon Malone, Holder’s wife and the sister of Vivian Malone, one of the students featured in Crisis; New interview with Richard Reeves, author of President Kennedy: Profile of Power; Footage from a 1998 event at the Museum of Tolerance in Los Angeles, featuring Drew, Pennebaker, Leacock, and filmmaker Albert Maysles; PLUS: An essay by documentary film curator and writer Thomas Powers. 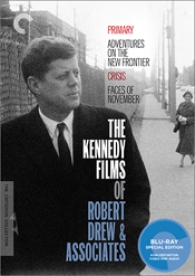 'Brief Encounter' (April 26) - After a chance meeting on a train platform, a married doctor (Trevor Howard) and a suburban housewife (Celia Johnson) enter into a muted but passionate, and ultimately doomed, love affair. With its evocatively fog-enshrouded setting, swooning Rachmaninoff score, and pair of remarkable performances (Johnson was nominated for an Oscar for her role), this film, directed by David Lean and based on Noël Coward’s play Still Life deftly explores the thrill, pain, and tenderness of an illicit romance, and has influenced many a cinematic brief encounter since its release.

The Blu-ray will feature 1080p video, an uncompressed English mono soundtrack, and supplements will include: Audio commentary from 2000 by film historian Bruce Eder; Interview from 2012 with Noël Coward scholar Barry Day; A Profile of “Brief Encounter,” a short documentary from 2000 on the making of the film; David Lean: A Self Portrait, a 1971 television documentary on Lean’s career; and Trailer. 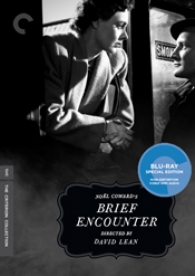