The classic musical will debut on Blu-ray in February, and you can pre-order the film here.

In an early announcement to retailers, Cohen Media Group is preparing 'Syncopation' for Blu-ray on February 10.

A one-of-a-kind cinematic extravaganza, 'Syncopation' is both a love story about two young musicians and a celebration of some of the greatest popular music of the first half of the 20th century. The romance between a young trumpeter (former child star Jackie Cooper of 'The Champ' and 'Our Gang' fame) and a New Orleans-born piano player (Bonita Granville, the silver screen's original Nancy Drew and the future producer of TV's 'Lassie') serves as the narrative plot line. But the core of the film is its celebratory history of "syncopated" music - jazz - tracing it from the turn-of-the-century sounds of ragtime, through Dixieland, the blues, Chicago jazz and the swing era.

Full specs have not been detailed yet but the Blu-ray will feature a new 2K restoration, and supplements will include a 2015 re-release trailer and nine short musical films.

You can find the latest specs for 'Syncopation' linked from our Blu-ray Release Schedule, where it's indexed under February 10. 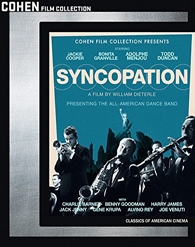 Discs mentioned in this article: (Click for specs and reviews)
Syncopation (Blu-ray)