The restored crime flick is now available for pre-order.

In an early announcement to retailers, Cohen Media Group is preparing 'Two Men in Town' for Blu-ray on November 10.

In this semi-autobiographical hard-boiled crime drama, director and co-writer José Giovanni presents a scathing indictment of the death penalty. When ex-safe cracker Gino (Alain Delon) is released from prison thanks to the aid of social worker and prison reformer Germaine (Jean Gabin), he finds that his attempts to go straight are made more difficult by a suspicious and vengeful chief inspector of police, as well as his former gang who hope to lure him back into a life of crime. This would be the last of three collaborations between Gabin and Delon and was recently remade with Forest Whitaker and Harvey Keitel. Features a

You can find the latest specs for 'Two Men in Town' linked from our Blu-ray Release Schedule, where it's indexed under November 10. 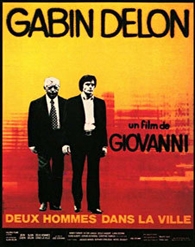 Discs mentioned in this article: (Click for specs and reviews)
Two Men in Town (1973) (Blu-ray)