Liliana Cavani's controversial war drama will arrive on Blu-ray in January, and you can pre-order the disc here.

In an early announcement to retailers, Cohen Media Group is preparing 'The Skin' for Blu-ray on January 13.

Based on the short stories of Curzio Malaparte, 'The Skin' is Liliana Cavani's controversial look at the aftermath of the German occupation of Italy during WWII and the equally difficult results of life during the Allied liberation. Marcello Mastroianni stars as writer Malaparte, who chronicled the desperate measures taken by his countrymen in order to survive. Burt Lancaster co-stars as the liberating American General unable to understand the devastation around him.

The Blu-ray will feature 1080p video, a DTS-HD MA 2.0 soundtrack, and supplements will include: Feature-length audio commentary by critics Wade Major and Andy Klein; Four featurettes, including three with director Liliana Cavani and one with production designer Dante Ferretti; Original French trailer; and 2014 re-release trailer.

You can find the latest specs for 'The Skin' linked from our Blu-ray Release Schedule, where it's indexed under January 13. 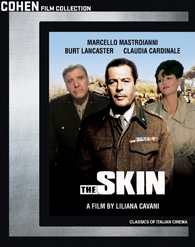 Discs mentioned in this article: (Click for specs and reviews)
The Skin (Blu-ray)