The story of Houston’s Kenny & Ziggy’s, and its co-owner’s journey to food fame comes to Blu-ray in July.

In an early announcement to retailers, Cohen Media Group is preparing to bring 'Deli Man' to Blu-ray on July 7.

Jewish culture reflects the heart of a vital ethnic history. As that culture continues to shift and adapt alongside mainstream America, delicatessen food – as its name suggests – remains a beloved communal delicacy. In Houston, Texas, third-generation deli man Ziggy Gruber has built arguably the finest delicatessen restaurant in the U.S.: Kenny & Ziggy’s. His story – augmented by the stories of iconic delis such as New York City’s Katz’s, 2nd Avenue Deli, the Carnegie and the Stage, and Beverly Hills’ Nate ’n Al – embodies a tradition indelibly linked to its savory, nostalgic foods.

How a Texas deli serving pastrami, blintzes, matzo ball soup and garlic dills has come to be one of America’s best is just the sort of tale that fascinates filmmaker Anjou (The Klezmatics: On Holy Ground, A Cantor’s Tale). He has a particular passion for Jewish culture and storytelling, and is committed to mining the territory between tradition and modernity as American Jewish life continues to reshape itself in the 21st century. And he serves it all up deliciously in this hit film, which was released theatrically in 2015 following screenings at major film festivals nationwide.

The film has received a plateful of rave reviews. Tom Long of the Detroit News said, “DELI MAN is a delicious little concoction, a consideration of the history of the Jewish delicatessen and how it reflects Jewish culture in America.” Syndicated critic Susan Granger called it “a delectable, artery-clogging delight.” Brian Orndorf of Blu-ray.com said the film is “a charismatic and informative journey into Jewish and foodie culture.”

Specs haven't been revealed yet, but supplements include the featurettes “Ziggy and Dennis Talk Deli,” “Ziggy Visits Acme Fish” and “Sam Brummer’s Story,” plus interviews and the original theatrical trailer.

You can find the latest specs for 'Deli Man' linked from our Blu-ray Release Schedule, where it is indexed under July 7. 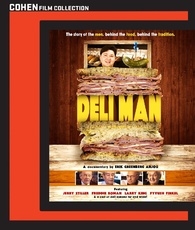