The boxed set of three films is set to arrive on Blu-ray this fall.

In an early announcement to retailers, Cohen Media Group is preparing 'The Benoit Jacquot Collection' for Blu-ray on October 20.

A Single Girl - A day in the life of a young and independent Parisian girl that is shot in real time as she copes with work and relationships.

"Just as she's about to start a job with room service at a luxury hotel in Paris, a young woman (Virginie Ledoyen) tells her boyfriend that she's pregnant and wants to keep their child. They quarrel but arrange to meet an hour later; the film then follows her at work for that hour in real time. This segment of Benoit Jacquot's compelling 1995 feature, written with Jerome Beaujour, is a stunning demonstration of moral and existential suspense in relation to duration, much like Agnes Varda's 1961 Cleo From 5 to 7." (Jonathan Rosenbaum). NEW 2K RESTORATION.

Keep It Quiet - Perhaps the most perfectly nuanced film Jacquot has ever made. The story works in the time-honored tradition of Tennyson's Enoch Arden.

Fabrice Luchini's businessman Grégoire has just done an undeserved stretch in the penitentiary for some sordid white-collar family business, but given his newfound hyper-awareness of the world and the way his wife (Huppert) and brother (Lindon) tiptoe around him, he might as well be returning from the dead. Keep It Quiet hides the particulars of many of its plot entanglements in order to concentrate on the complex emotions entangling its characters. (Film Society of Lincoln Center). NEW 2K RESTORATION.

The Disenchanted - Jacquot has often referred to this beautifully concentrated 1990 film as a new beginning, a break from the "theoretically" driven films of the 70s and 80s into the pursuit of "something human," in the director's words.

The film is built around the troubled countenance of 17-year-old Judith Godrèche in the role of Beth, a teenager in the midst of a painful moral education. She is put in the unenviable position of holding her family together and debasing herself at the suggestion of both her scornful bedridden mother and her no-good boyfriend. Everything begins and ends with Godrèche's extraordinary dark eyes, at once signaling emotional deprivation, wounded intelligence, and hard-won wisdom.

Jacquot and his extraordinary cinematographer Caroline Champetier give us the world as if refracted through those eyes, a strangely magical environment in which every object and encounter feels potentially ominous and/or liberating.

Jacquot once described the film perfectly in an interview with Gerald Peary and Peter Brunette: "Beth's losing her childhood, becoming a woman, and becoming disenchanted. (Film Society of Lincoln Center). NEW 2K RESTORATION.

Specs and supplements of yet to be revealed, but suggested list price is $49.98.

You can find the latest specs for 'The Benoit Jacquot Collection' linked from our Blu-ray Release Schedule, where it is indexed under October 20. 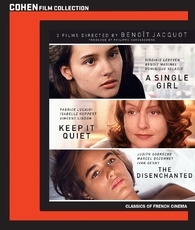