The 2015 documentary is slated for a Blu-ray in December.

In an early announcement to retailers, Cohen Media Group is working on 'Hitchcock/Truffaut' for Blu-ray on December 20.

In 1962 Hitchcock and Truffaut locked themselves away in Hollywood for a week to excavate the secrets behind the mise-en-scène in cinema. Based on the original recordings of this meeting—used to produce the mythical book Hitchcock/Truffaut—this film illustrates the greatest cinema lesson of all time and plummets us into the world of the creator of Psycho, The Birds, and Vertigo. Hitchcock's incredibly modern art is elucidated and explained by today's leading filmmakers: Martin Scorsese, David Fincher, Arnaud Desplechin, Kiyoshi Kurosawa, Wes Anderson, James Gray, Olivier Assayas, Richard Linklater, Peter Bogdanovich and Paul Schrader.

Specs have yet to be revealed, but supplements will include: Q&A with Kent Jones & Noah Baumbach; An Appreciation of Notorious; Peter Bogdanovich Remembers Hitchcock; Richard Linklater on Truffaut; and Rope: Pro and Con.

You can find the latest specs for 'Hitchcock/Truffaut' linked from our Blu-ray Release Schedule, where it is indexed under December 20. 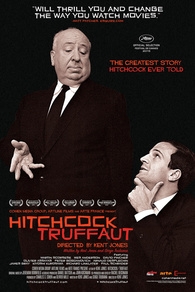