Julie Dash's 'Daughters of the Dust' Blu-ray Announced and Detailed

The 1991 film will be available on Blu-ray next month.

In an early announcement to retailers, Cohen Media Group is working on 'Daughters of the Dust' for Blu-ray on April 11.

At the dawn of the 20th century, a multigenerational family in the Gullah community in the Sea Islands off of South Carolina -- former West African slaves who adopted many of their ancestors' Yoruba traditions -- suffers a generational split. An older group of sisters return after migrating north to New York with intentions of bringing the rest of their family back across the water to the mainland with them. But, tensions arrive when the newly Americanized sisters view their homeland's way of living as backwards, all while Nana, the family elder who embodies the traditions and folklore of their African roots, is struggling to keep the family together and to pass on the knowledge of their ancestors.

You can find the latest specs for 'Daughters of the Dust' linked from our Blu-ray Release Schedule, where it is indexed under April 11. 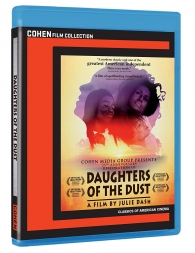