The 1964 drama will receive the Blu-ray treatment next year.

In an early announcement to retailers, Cohen Media Group says 'A Married Woman' will arrive on Blu-ray on May 24.

A MARRIED WOMAN is an often overlooked masterwork from Godard's most productive period. The plot appears to be simple: Charlotte (Macha Méril) is a young married woman having an affair with an actor. When she discovers that she is pregnant, she must decide which man is the father and which man she will stay with. In Godard's hands, however, the film, described as a film about a woman's beauty and the ugliness of her world, is also a biting critique of consumer culture and the media constructed obsession with image. Subtitle Fragments of a film shot in 1964, in black and white, Godard creates a modernist collage that is beautifully shot by Godard's longtime cinematographer Raoul Coutard. The Cohen Media Group is proud to present for the first time in the US this stunning new restoration from the original negative.

You can find the latest specs for 'A Married Woman' linked from our Blu-ray Release Schedule, where it is indexed under May 24. 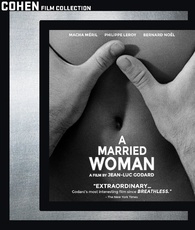