'In the Courtyard' Starring Catherine Deneuve Dated for Blu-ray

The French film will arrive on Blu-ray in October, and you can pre-order the disc here.

In an early announcement to retailers, Cohen Media Group is preparing 'In the Courtyard' for Blu-ray on October 6.

Middle-aged musician Antoine suddenly decides to end his career. After several days aimless wandering, he is hired as the caretaker of an old residential building in Paris. Mathilde is a recently retired resident, generous-spirited and deeply involved with the management of the building. After she discovers a crack in her living room wall, her worry gradually turns to panic - what if the building were to collapse? Slowly, Antoine develops a fondness for this woman he is afraid will slip into madness. Through a confusion of misfires and anxiety, the two develop an awkward friendship, funny yet solid, which might just get them through this difficult patch...

Supplements have not been detailed yet, but the Blu-ray will feature 1080p video and a French DTS-HD MA 5.1 soundtrack.

You can find the latest specs for 'In the Courtyard' linked from our Blu-ray Release Schedule, where it's indexed under October 6. 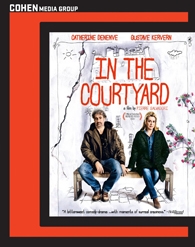 Discs mentioned in this article: (Click for specs and reviews)
In the Courtyard (Blu-ray)