The drama starring Charlotte Gainsbourg is coming to Blu-ray in March.

In an early announcement to retailers, Cohen Media Group is preparing 'Confession of a Child of the Century' for Blu-ray on March 29.

Paris 1830. Betrayed by his mistress, Octave falls into despair and debauchery - the disease of the century . The death of his father takes him to the country, where he meets Brigitte, a young widow ten years his elder. Octave falls passionately in love, once more. But will he have the courage to believe in it? Includes Theatrical trailer; Interview with literary scholar

Supplements have not been detailed, but the Blu-ray will feature 1080p video and a DTS-HD MA 5.1 soundtrack.

You can find the latest specs for 'Confession of a Child of the Century' linked from our Blu-ray Release Schedule, where it's indexed under March 29. 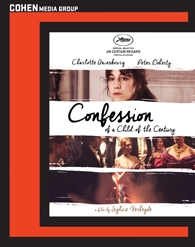 Discs mentioned in this article: (Click for specs and reviews)
Confession of a Child of the Century (Blu-ray)