The three film collection will arrive on Blu-ray in February.

In an early announcement to retailers, Cohen Film Collection is preparing '3 Classic Films by Claude Chabrol' for Blu-ray on February 21. The three film collection will include 'Betty,' 'The Swindle,' and 'The Torment (L'Enfer).'

Cohen Film Collection is proud to present for the first time in HD, a collection of films by Claude Chabrol, one of the most prolific and widely respected of French film directors. As one of the prime instigators of the French New Wave, Chabrol directed lean narrative films whose keenly observed realism typically drew inspiration from the suspense film and psychological thriller.

'Betty' - Alone and drunk, Betty, is led to a Paris restaurant by a stranger.  Here, she meets an older woman, Laure, with whom she strikes up an instant rapport.  The two women seem to have suffered the same lot in their lives.  Laure takes Betty back to her hotel and helps to cure the young woman of her depression and alcoholism.  Little by little, Betty pieces together her recent history and realizes that perhaps her life is not worth living.  The she meets Mario, Laure’s lover...

'The Swindle' - Betty and Victor tour quietly around France in their motor home living safely on part-time swindles…until they become involved in a scam with high stakes and international implications. Chabrol’s 50th film is a deft and entertaining thriller.

'The Torment (L'Enfer)' - Paul (François Cluzet) has just bought a charming waterfront hotel in the heart of France. In debt for the next ten years, he sets to work with his beautiful new wife, Nelly (Emmanuelle Béart). The life of the young couple resembles a dream come true until Paul’s suspicions and jealousy get the best of him. His increasing obsession turns into madness that ends in a tragedy.

You can find the latest specs for '3 Classic Films by Claude Chabrol' linked from our Blu-ray Release Schedule, where it's indexed under February 21. 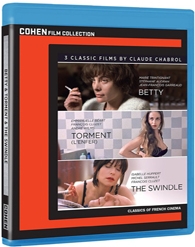 Discs mentioned in this article: (Click for specs and reviews)
3 Classic Films by Claude Chabrol (Blu-ray)