The acclaimed drama will be available on Blu-ray at the end of the month.

In an early announcement to retailers, Cinema Guild will be releasing 'Horse Money' on Blu-ray on May 31.

A visionary masterwork from the renowned director of COLOSSAL YOUTH, Pedro Costa's 'Horse Money' is a mesmerizing odyssey into the real, imagined and nightmarish memories of the elderly Ventura, a Cape Verdean immigrant living in Lisbon. The time is now, a numbing and timeless present of hospital stays, bureaucratic questioning, and wandering through remembered spaces… and suddenly it is also then, the mid '70s and the time of Portugal's Carnation Revolution, when Ventura got into a knife fight with his friend Joaquim. 'Horse Money' is a self-reckoning, a moving memorialization of lives in danger of being forgotten, as well as a piercingly beautiful work of modern cinema.

Specs have yet to be revealed, but supplements include: OUR MAN (2010, 23 minutes), a short film by Pedro Costa; and a booklet featuring "The Road to Perdition," an essay by film critic Chris Fujiwara.

You can find the latest specs for 'Horse Money' linked from our Blu-ray Release Schedule, where it is indexed under May 31. 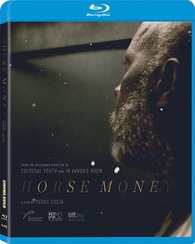