The Grand Jury Prize Winner at the 70th Venice International Film Festival is bound for Blu-ray in January.

In an early announcement to retailers, the Cinema Guild will be releasing 'Stray Dogs' on Blu-ray on January 13.

A single father makes his meager living holding up an advertising placard on a traffic island in the middle of a busy highway. His children wait out their days in supermarkets before they eat with their father and go to sleep in an abandoned building. As the father starts to come apart, a woman in the supermarket takes the children under her wing. There are real stray dogs to be fed in Tsai's everyday apocalypse, but the title also refers to its principal characters, living the cruelest of existences on the ragged edges of the modern world.

'Stray Dogs' is many things at once: minimal in its narrative content and syntax, as visually powerful as it is emotionally overwhelming, and bracingly pure in both its anger and its compassion. One of the finest works of an extraordinary artist.

The Blu-ray will feature 1080p video, a lossless 5.1 soundtrack, and supplements include: Journey to the West, a film by Tsai Ming-liang (2014, 52 minutes), Theatrical Trailer, the Blu-ray exclusive Tsai Ming-liang Master Class at the Cinémathèque Française, and a booklet featuring essay by Jonathan Rosenbaum.

You can find the latest specs for 'Stray Dogs' linked from our Blu-ray Release Schedule, where it is indexed under January 13. 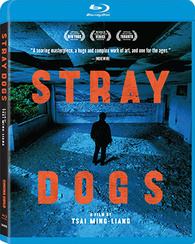