The documentary arrives on Blu-ray in November.

In an early announcement to retailers, Cinema Guild says 'Counting' will be available on Blu-ray on November 8.

In fifteen linked chapters shot in locations ranging from Moscow to New York to Istanbul, Counting merges city symphony, diary film, and personal/political essay to create a vivid portrait of contemporary life. Perhaps the most personal of Cohen's films (Museum Hours, Chain, Instrument, Benjamin Smoke), Counting measures street life, light and time, noting not only surveillance and overdevelopment but resistance and its phantoms as manifested in music, animals and everyday magic.

Specs have yet to be revealed, but supplements include: Three short films by Jem Cohen: On Essex Road (2016, HD, 11 min), Bury Me Not (2016, HD, 10 min), and Light Years (1989, Super 8, 5 min); Theatrical Trailer; and Illustrated Booklet featuring and essay by Jem Cohen and review by Ann Hornaday of the Washington Post.

You can find the latest specs for 'Counting' linked from our Blu-ray Release Schedule, where it is indexed under November 8. 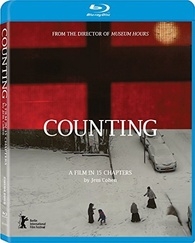