The western drama will arrive on Blu-ray in July, and you can pre-order the film here.

In an early announcement to retailers, Cinema Guild is preparing ''Jauja' for Blu-ray on July 21.

An astonishingly beautiful and gripping Western starring Viggo Mortensen, 'Jauja' (pronounced how-ha) begins in a remote outpost in Patagonia during the late 1800s. Captain Gunnar Dinesen has come from abroad with his fifteen year-old daughter to take an engineering job with the Argentine army. Being the only female in the area, Ingeborg creates quite a stir among the men. She falls in love with a young soldier, and one night they run away together. When Dinesen realizes what has happened, he decides to venture into enemy territory to find the young couple. Featuring a superb performance from Mortensen, 'Jauja' (the name suggests a fabled city of riches sought by European explorers) is the story of a man's desperate search for his daughter, a solitary quest that takes him to a place beyond time, where the past vanishes and the future has no meaning.

You can find the latest specs for 'Jauja' linked from our Blu-ray Release Schedule, where it's indexed under July 21. 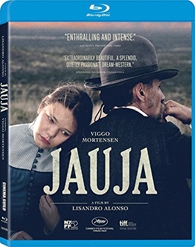 Discs mentioned in this article: (Click for specs and reviews)
Jauja (Blu-ray)