In an early announcement to retailers, Cinema Guild is preparing 'About Elly' for Blu-ray on August 18.

With the return of their friend Ahmad from Germany, a group of old college pals (two married couples and a brother and sister, along with three young kids) decide to reunite for a weekend outing by the Caspian Sea. The fun starts right away as they quickly catch on to the plan of lively Sepideh, who has brought along Elly, her daughter s kindergarten teacher, in hopes of setting her up with recently divorced Ahmad. But seemingly trivial lies, which start accumulating from the moment the group arrives at the seashore, suddenly swing round and come back full force when one afternoon Elly suddenly vanishes. Her mysterious disappearance sets in motion a series of deceptions and revelations that threaten to shatter everything they hold dear.

Specs have not been detailed yet, but supplements will include: Press Conference with director Asghar Farhadi and actors Golshifteh Farahani, Peyman Moadi, Rana Azadivar and Merila Zarei at the 59th Berlin Film Festival; From Iran, A Separation, a documentary by Azadeh Mousavi and Kourosh Ataei; Theatrical Trailer; and a Booklet featuring essay by Tina Hassannia, author of "Asghar Farhadi: Life and Cinema."

You can find the latest specs for 'About Elly' linked from our Blu-ray Release Schedule, where it's indexed under August 18. 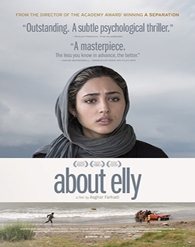 Discs mentioned in this article: (Click for specs and reviews)
About Elly (Blu-ray)