In an early announcement to retailers, Cinedigm has revealed 'Traded' will be available on Blu-ray on August 2.

In 1880s Kansas, sharpshooter turned rancher, Clay Travis (Michael Paré), goes from happily married father of two to a man on a mission after the disappearance of his 17 year-old daughter, Lily. Determined to protect what little family he has left, Clay leaves his quiet ranch and heads to Wichita where, after confronting the ruthless Ty Stover (Trace Adkins), he discovers that Lily's been traded away into an underground sex ring in Dodge City. And it's there, with the help of an unlikely companion -- hardened old barkeep Billy (Kris Kristofferson) -- that Clay makes a stand to bring his daughter home, leaving a trail of gunsmoke and bodies in his wake.

'Traded' delivers "cinematic comfort food to fans of the venerable genre," says Frank Scheck of The Hollywood Reporter. And Amanda Gilroy of Pop Matters.com says, "[Traded] turns out to have all the compensatory pleasures of an old-fashioned Western".

Filled with dramatic vistas and sweeping panoramas, "'Traded' looks authentic. From the Rusty Spur Saloon and the drab 1880s couture and cuisine, to the characters' imperfect skins, these look like real people in real places at a particular historical moment[1]." The gritty Western, directed by Timothy Woodward Jr. (Weaponized, 4Got10) was shot in California and New Mexico, utilizing locations in the Yucca Valley, Paramount Ranch and Big Sky Movie Ranch that have been the backdrops to westerns such as Gunfight at the OK Corral, The Virginian and many other classics of the genre. TRADED co-stars include Tom Sizemore, Martin Kove, Quinton Aaron and, in her theatrical debut, Kris' daughter, Kelly Kristofferson.

The Blu-ray will feature 1080p video, a lossless 5.1 soundtrack, and supplements include a making-of featurette and deleted scenes.

You can find the latest specs for 'Traded' linked from our Blu-ray Release Schedule, where it is indexed under August 2. 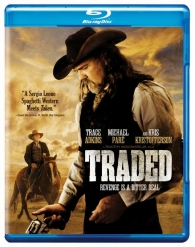