In an early announcement to retailers, Cinedigm will be releasing 'Weaponized' on Blu-ray on March 1.

After a blatant terrorist attack on the Pentagon, and the resulting new war on terror, private military contractor Kyle Norris (Sizemore) facilitates the development of a bio-mechanical weapons program by Professor Clarence Peterson (Rourke). The next-gen program allows soldiers to swap consciousness with a target, giving them temporary, yet complete, control. While the program was intended to combat terrorists and safe guard American soldiers, abuse has been rampant. Enter down-and-out Detective Walker (Messner), who unwittingly stumbles upon the failing bio-weapons program, and he's forced to fight to both shut it down and protect his young family from those who'll stop at nothing to keep things moving forward.

"WEAPONIZED gave us the unique opportunity to combine fast-paced action with an intellectual scientific element that really makes you think. With the plot being set in the future, we were able to really use our imagination and create our own world, making the storytelling more exciting and challenging," said Woodward Jr.

You can find the latest specs for 'Weaponized' linked from our Blu-ray Release Schedule, where it is indexed under March 1. 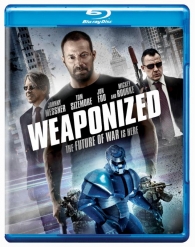