The film stars Mao Daichi, Lindsay Kay Hayward, and Hairi Katagiri and will be released on Blu-ray in March.

In an early announcement to retailers, Cinedigm will be bringing 'R100' on Blu-ray on March 10.

A mild-mannered family man with a secret taste for S&M finds himself pursued by a gang of ruthless dominatrices each with a unique talent in this hilarious and bizarre take on the sex comedy from Japanese comedy giant Hitoshi Matsumoto (Big Man Japan, Symbol, Scabbard Samurai).

You can find the latest specs for 'R100' linked from our Blu-ray Release Schedule, where it's indexed under March 10. 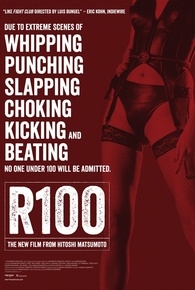