The man who inspired 'Dog Day Afternoon' takes the spotlight in this documentary heading to Blu-ray in November. You can pre-order the movie now.

In an early announcement to retailers, Cinedigm is preparing 'The Dog' for Blu-ray on November 4.

In 1972, John Wojtowicz attempted to rob a Brooklyn bank to pay for his lover's sex change operation. The act resulted in a fourteen-hour hostage situation that was broadcast on TV. Three years later Al Pacino portrayed his crime in 'Dog Day Afternoon.' The film had a profound influence on Wojtowicz (who pronounced his name "Woto-wits"). Drawing upon extraordinary archival footage, the film shuffles between the 1970s and the 2000s. We gain a historic perspective on New York's gay liberation movement, in which Wojtowicz played an active role. In later footage, he remains a subversive force, backed by the unconditional love of his mother Terry, whose wit and charm infuse the film. How and why the bank robbery took place is recounted in gripping detail by Wojtowicz and various eyewitnesses.

Specs and supplements have not been detailed yet, but suggested list price for the Blu-ray is $29.93.

You can find the latest specs for 'The Dog' linked from our Blu-ray Release Schedule, where it's indexed under November 4. 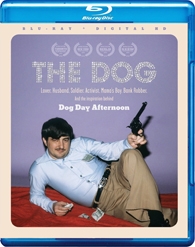 Discs mentioned in this article: (Click for specs and reviews)
The Dog (Blu-ray)