The animated adventure from Miguel Pujol soars to Blu-ray in February.

In an early announcement to retailers, Cinedigm has revealed they will be releasing 'The Aviators' on Blu-ray on February 10.

Based on a True story. In 1918 the quiet life on a farm is suddenly threatened by the arrival of the first World War. Aware of their responsibility to help against the enemy, a clumsy but bold group of carrier pigeons and their sidekick engineer mouse (Foxyworthy) become messengers to try and save the life of a battalion of American soldiers.

You can find the latest specs for 'The Aviators' linked from our Blu-ray Release Schedule, where it is indexed under February 10. 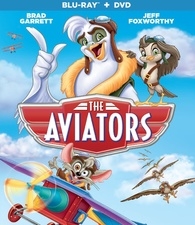