In an early announcement to retailers, Cinedigm and Studio City Pictures are working on 'Stagecoach: The Texas Jack Story' for Blu-ray on December 13.

The film is a hardscrabble period Western loosely based on the real-life exploits of 19th-century American outlaw Nathaniel Reed. After retiring from his life as an infamous outlaw, livery owner Reed (Trace Adkins) quietly leads an honest existence on the Texas frontier with his devoted wife, Laura Lee. But his gun-slinging past suddenly comes back to haunt him when he learns that Calhoun (Kim Coates), the man he once maimed during a stagecoach robbery, is now an unhinged U.S. Marshal who'll stop at nothing to exact vengeance. After a violent shootout brings tragic consequences, Nathaniel partners with his original gang, returns to his lawless ways and becomes Texas Jack: the most wanted outlaw in the West.

An action-packed quest for redemption, Stagecoach is filled with gunplay a'plenty, galloping getaways, a beautiful bounty hunter, and the possibility of a second chance. Directed by Terry Miles (Lonesome Dove Church, Dawn Rider) and written by Matt Williams and Dan Benamor, the film also co-stars Nelson and Claude Duhamel as Reed's gang, Michelle Harrison (Fifty Shades Darker, "The Flash") as his wife, frontier doctor Garry Chalk (The Confirmation, Godzilla) and Helena Marie ("Supernatural") as Calhoun's volatile partner who pursues vengeance at any price.

You can find the latest specs for 'Stagecoach: The Texas Jack Story' linked from our Blu-ray Release Schedule, where it is indexed under December 13. 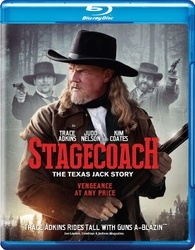