Pulse-pounding '4Got10' Announced for Blu-ray

In an early announcement to retailers, Cinedigm is set to release '4Got10' on Blu-ray on October 6.

4GOT10 begins as Brian Barns (Johnny Messner) wakes up in the desert wounded and surround by eight dead bodies, millions of dollars in cash and a van full of cocaine. Worse yet, he has no memory of who he is or how he got there. However, he soon learns that he is being hunted by a notorious drug lord (Danny Trejo), a DEA agent (Dolph Lundgren), and a corrupt Sherriff (Michael Paré), all of whom will stop at nothing to find him. On the run for his very life, Barns slowly finds out who he really is, but the more he remembers, the more deadly things become.

Specs have yet to be revealed, but supplements will include behind-the-scenes featurettes and six deleted scenes.

You can find the latest specs for '4Got10' linked from our Blu-ray Release Schedule, where it is indexed under October 6. 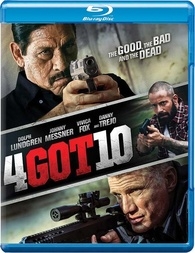