The 2007 animated fantasy is headed for Blu-ray in November. You can pre-order the Blu-ray now.

In an early announcement to retailers, Cinedigm is preparing 'Nocturna' for Blu-ray on November 4.

Visually stunning and wildly inventive, Nocturna explores the mystery of the night in a sweeping adventure full of Alice in Wonderland-like characters and moody, dream-inspired landscapes. Have you ever wondered why your hair looks funny in the morning or where the sounds outside your window come from at night? A young boy named Tim finds out after an unusual discovery on the rooftop of his orphanage plunges him into the secret world of Nocturna, inhabited by curious creatures who control the night.

You can find the latest specs for 'Nocturna' linked from our Blu-ray Release Schedule, where it's indexed under November 4. 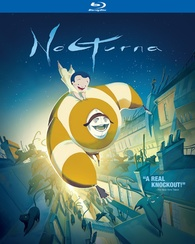