The film starring Academy Award-winner Anne Hathaway is bound for Blu-ray in March.

In an early announcement to retailers, Cinedigm will be releasing 'Song One' on Blu-ray on March 24.

Franny (Hathaway), a PhD candidate in anthropology, has not spoken to her brother Henry (Rosenfield), a struggling musician in Brooklyn, in six months because she strongly disagrees with his career choices. However, when she receives a phone call that Henry has been in a terrible accident leaving him in a coma, she returns home to her estranged family to mend the broken wounds. Unsure if Henry will ever wake up, Franny uses her brother's journal to indirectly try and understand his world. While learning more about her brother's life by visiting the local music hotspots he frequents, Franny finds love in the least likely place, a musician (Johnny Flynn).

Bonus features include deleted scenes and a behind the scenes look at the recording of the soundtrack.

You can find the latest specs for 'Song One' linked from our Blu-ray Release Schedule, where it is indexed under March 24. 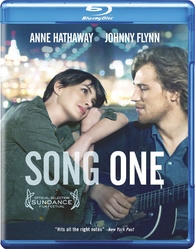