The fantasy horror flick is now available for pre-order.

In an early announcement to retailers, Cinedigm is preparing 'Innocence' for Blu-ray on March 3.

Haunted by the death and dreams of her beloved mother in a Montauk surfing accident, 16-year-old Beckett and her father, novelist Miles Warner, move to Manhattan and attempt to piece together their shattered life. Now enrolled at the exclusive Hamilton preparatory school, her psychosis and hallucinations intensify with the dubious suicides of current and past students, as does her first love for Tobey Crawford. The discovery that her new school may be run by a coven of beautiful and seductive women who perpetuate their youth by drinking the blood of virgins becomes the ultimate challenge of Beckett and Tobey s young lives.

You can find the latest specs for 'Innocence' linked from our Blu-ray Release Schedule, where it's indexed under March 3. 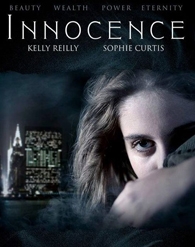 Discs mentioned in this article: (Click for specs and reviews)
Innocence (Blu-ray)