The latest season of the animated show is rocketing toward Blu-ray, and you can pre-order the series here.

In an early announcement to retailers, Cinedigm is preparing 'Red vs. Blue: Season 13' for Blu-ray on October 13.

The sim-troopers of Blood Gulch have seen their fair share of insanity over the years, but they ve never faced anything quite like this. Stranded on the planet Chorus, the Reds and Blues must convince two enemy armies to join forces or suffer complete annihilation at the hands of a bloodthirsty war lord. As the final installment in the critically acclaimed Chorus Trilogy, Red vs. Blue: Season 13 is as hilarious as it is thrilling. Between deadly mercenaries, alien artifacts and old rivalries, our hapless heroes are in for the fight of their lives in the longest running sci-fi/comedy series in American history, Red vs. Blue.

You can find the latest specs for 'Red vs. Blue: Season 13' linked from our Blu-ray Release Schedule, where it's indexed under October 13. 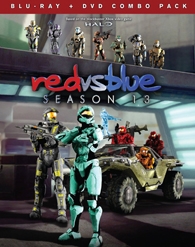 Discs mentioned in this article: (Click for specs and reviews)
Red vs. Blue: Season 13 (Blu-ray)