In an early announcement to retailers, Cinedigm is working on 'Open Windows' for Blu-ray on January 27.

When Nick (Elijah Wood) discovers that he's won a dinner date with his favorite star Jill Goddard (Sasha Grey), he's incredibly excited to finally get the chance to meet her. That excitement deflates when Jill refuses to honor the contest and all of Nick's hopes are dashed. He's intrigued when Chord (Neil Maskell), a man claiming to be Jill's campaign manager, offers him something he can't quite refuse, the ability to constantly view Jill via computer. Nick is initially reluctant, but is finally persuaded, unaware that this decision will put both Jill and him at risk.

Specs have yet to be revealed, but supplements include: The Making of Open Windows and Visual Effects Reel.

You can find the latest specs for 'Open Windows' linked from our Blu-ray Release Schedule, where it is indexed under January 27. 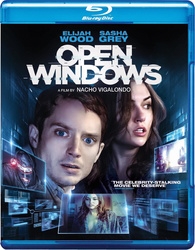