The animated horror anthology will hit Blu-ray next month.

In an early announcement to retailers, Cinedigm will be releasing 'Extraordinary Tales' on Blu-ray on February 2.

Five of Edgar Allan Poe's best-known stories are brought to vivid life in this heart-pounding animated anthology featuring Sir Christopher Lee, Bela Lugosi, Julian Sands, Roger Corman and Guillermo del Toro. Murderous madmen, sinister villains and cloaked ghouls stalk the darkened corridors of Poe's imagination, as his haunting tales are given a terrifying new twist by some of the most beloved figures in horror film history. Stories include: The Tell-Tale Heart, The Fall of the House of Usher, The Masque of the Red Death, The Pit and the Pendulum, and The Facts in the Case of Mr. Valedemar.

You can find the latest specs for 'Extraordinary Tales' linked from our Blu-ray Release Schedule, where it is indexed under February 2. 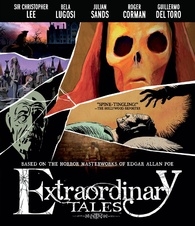